True Origin of the Universe

NO BIG BANG. Just, very slowly, one electron and one proton at a time, all over the place.

An Improved, Logical Theory which Complies with All Science Laws

Consider a single Photon of light which begins to cross the room you are in, or a single photon of light emitted from a Wisconsin lighthouse on Lake Michigan.   I am not mentioning the millions of other Photons of light that were emitted in the following second of time.   If that Photon is "bright enough", that is, if it contains at least 1.2 MeV of energy in it, then at any moment in the following thousandth of a second, as that Photon crosses over Lake Michigan on its way to a boat moored in Michigan, it could (spontaneously) do an Einstein Energy Conversion event.   If that occurred, that Photon (and the light) would disappear and an Electron and an anti-Electron would suddenly appear!   Fortunately, these appear to be really rare events, so the boat would still see most of the light of the lighthouse.

But what about a brilliant flash of light of a Pulsar of an object a billion light years away from us.   Will that Photon cruise along for a billion years in getting to us so we might see it?   How many such Photons will actually get the full billion-year trip to us on Earth?   How many instead will "disappear along that very long way as Pair Production events"?   No one knows!

In my long career as a Physicist, I had been involved in this unique experiment around 35 times, which we Physicists call the Pair Production Experiment.   It is quite weird to do, as it seems to violate things that high school science teachers had taught all of us!   It is likely that anyone who has not performed a Pair Production Experiment may not be able to grasp the immense importance of this experiment.   First, it is a spontaneous experiment, of Einstein's E = m * c2 energy conversion where the Physicist actually has NO control whether it will work or not.   A Physicist must be remarkably patient, usually taking tens of thousands of photographs of a tiny space in a Cloud Chamber or a Bubble Chamber, where absolutely nothing happens!   We actually hire many housewives to examine all those photos so that we (Graduate) Physics students only have to spend time looking at photos such as this one here where something interesting happens!   Usually, in all the tens of thousands of photos, the only thing(s) that are seen are straight lines (or nothing at all) of neutral photons crossing the photos.

A successful Pair Production Experiment begins with (Einstein energy) a single (really tiny, absolutely massless) object we call a Photon (one which contains at least 1.2 MeV of energy in it) going in a straight line across the photo (on the left here).   If the experiment is successful, the Photon (that Einstein energy) suddenly disappears (and we do not know why!) (as in this photo here) and instead, we are left with a photograph of two brand-new actual particles (Einstein mass), each making opposite spirals in the magnetic field!   One is an Electron (which has a Rest-Mass of 0.5109989461 MeV) and the other is an Anti-electron (which also has a Rest-Mass of 0.5109989461 MeV) (which is commonly also called a Positron).   I will personally always remember my first photograph of the 1960s of the first brand-new particles which “I” was involved in creating! 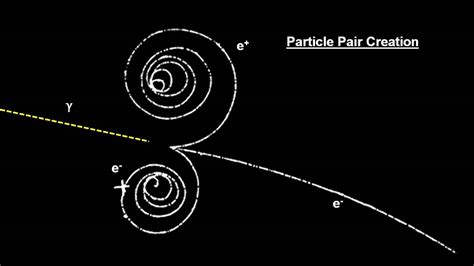 This is not my original photo from 55 years ago. But it is one of the actual black-and-white photos that we Physicists get in magnetic fields from Pair Production Experiments. I see hundreds of speculative drawings on the Internet. This is what we Physicists actually get and analyze. (Some Physics talk here!) A Photon (gamma, Einstein energy) comes in from the left. The Photon is electrically neutral so it goes straight in the magnetic field. Then, in this successful experiment, the Photon (of Einstein energy) spontaneously disappears, into becoming an Einstein Electron and a Positron (both Einstein mass, both of which are electrically charged so their paths are curved by the magnetic field. Since we know the strength of the magnetic field that we used, we spent our lives in measuring our photos for the curvature of the two (new) charged particles circling around. For this photo, the lower object rotates around the correct way to confirm that it is charged negatively. Then the curvature of that spiral tells us the Newtonian movements to tell us that in that magnetic field, the object must have the mass of an Electron! The other object rotates the opposite direction in that magnetic field, so it must be positively charged. Curvature tells us that it was a Positron, an e+. If a Physicist looks really carefully at this photo, there are two details. We Physicists notice that the pattern of the negative and positive spirals are noticeably different. This is because each of the two new objects also have some Kinetic Energy. In this case the initial photon had much more energy, and the experiment ended with yet another negative object, a very gradually curving line off to the right. Careful analysis shows that this was another Electron, which had some of its own kinetic energy. But the total of the energy in the negative objects (existence of mass plus kinetic energy) exactly matched the total energy of the positive object, as a Pair Production experiment must have, to properly Conserve Energy.

Yes, these are incredibly tiny objects which I had seen (out of "nothing"), but if you have 13.8 billion years and an entire enormous Universe to work in, many trillions of Pair Production Experiments might spontaneously occur. I sort of call these “the Big Dribble” in possibly describing how the entire Universe might have been gradually created! For the record, the vast majority of the photons that go through our area do not do the "spontaneous event" and they simply pass through as straight lines across our photos, and there is no "Pair Production" event which usually occurs. We do not know why an occasional photon spontaneously does this. But we have learned that it is a good idea to take at least 30,000 photographs in each attempt to observe an Einstein Photon Electron anti-Electron event. I actually never asked my Professor just how many photos he would schedule in each experiment. All of my 35 lifetime experiments resulted in at least one successful photo, although some also resulted in a second success and one even resulted in three successful photos. But by brute force, apparently Professors learned to schedule at least 30,000 photos.

The claim here is just that with so many trillions of Photons passing through enormous volumes of space of the Universe, in 13.8 billion years, enough photons have done this peculiar event that the entire Universe may have gradually been populated to result in all the Protons and Electrons which arose and which created the whole works of what we call the Universe! These “spontaneous events” did not all occur “at one instant” and “in one specific location”. They regularly occur, maybe even now, all over the entire Universe!

For the record, in the room you are now sitting in, countless millions of Photons pass through every second, of all sorts of colors (energies) and wavelengths, although very few of them probably have any Pair Production events occur. (You don't have the Cloud Chamber or magnetic field generator or cameras to detect whatever does or does not occur in your room!) But the point being made here is that there are lots of brand new Electrons and Positrons which are coming into existence right there with you, now! And also, everywhere else as well! A far more rare version of the Pair Production event is if the Photon has a lot more energy (at least 1850 times as much energy), including Cosmic Rays. Instead of the Photon vanishing to create a brand-new Electron and Anti-Electron, it vanishes to create a brand-new Proton and Anti-Proton. In my entire lifetime, I have only witnessed this once! But again, if we have the entire Universe to work in, and 13.8 billion years, I feel it is possible for all the Protons and Electrons and Neutrons and Atoms in the Universe may have been created in this manner.

This is clearly a far more logical explanation than the “Big Bang” that is accepted as credible.

When a new Proton electrostatically joins up with a new Electron, a brand new atom of Hydrogen can become created! This can be standard operating procedure. It is not clear how Photons can travel billions of light years, but maybe this explains how and why visible light is all over the Universe, that maybe many of those Photons do not contain enough energy to do a Pair Production event along the way.

In the Big Bang, allegedly, the entire creation of the Universe occurred in a blink of an eye, 10-32 second. How could anyone believe that the entire 10+54 kilograms of particles of the entire Universe could each accelerate, then cruise, and then decelerate at many trillions of times faster than the speed of light?