This method of determining bodyfat percentage is so much fun that kids will generally be reminding their parents when they get to do it again! And it is so accurate that a weekly or monthly Progress Chart can show real-time improvements or back-sliding! In 5 minutes of fun, our young ladies determine their average body density to an accuracy of one part in a thousand! (The older girl in the PSA determined that her average body density was between 1.0056 and 1.0067 gm/cc in this fun activity! She was pretty athletic and then weighed about 90 pounds, where here Bodyfat was then 21.9%, all in just five minutes of fun!) There are few research labs that can match that precision!

A set of Public Service Announcements (PSAs) are available to air on many television stations, which show how this method works. The following discussion follows the storyline of those PSAs.

Here are also some streaming video files of the PSAs:


This presentation was first placed on the Internet in March 2005. 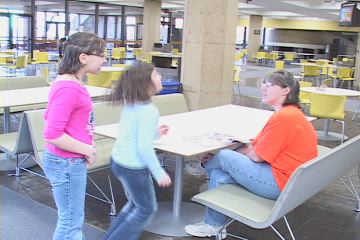 Obviously, this testing could be done in ANY swimming pool, so people who have in-ground or above-ground swimming pools could do this testing whenever they wanted. However, they would then need to make the set of Batons (fully described in one of the other web-pages in this site). We suspect that, if enough public pools that are easily accessible to the public make or get their own set of the Batons, few people should find it necessary to make their own set! At least, that is the theory!

If they or some neighbor has a swimming pool, we have designed a set of Batons which are actually discarded Pepsi bottles with some pennies in them, where in an hour, the whole set of needed Batons can be assembled!

Credits, regarding the PSAs

You can actually get a ball-park number for your bodyfat percentage without making these things, which is likely to be within about ±10% of your actual bodyfat number. You need a swimming pool and a friend!

We mention this because there are a LOT of people who have been told that they have 8% or 4% or 11% bodyfat, due to using the extremely inaccurate bodyfat caliper method or electrical impedance (methods absolutely proven to regularly be ±15% off either way, so in other words, meaningless except for bragging purposes.) A person could try to alter this method by intentionally normally exhaling first, which makes you float around one inch lower, which would appear to give an estimate of around 6% lower. By attempting to exhale all the air you can, you can lower your body by about 3 inches, which can give the appearance of around 16% lower estimate. The point is that by simply altering the amount of air in your lungs, you could change this reading by as much as 16%, another indication of why the far more accurate and repeatable Batons and Floats is desirable. If you really want to believe that you are at 8% or 11% so you can brag to your friends, there are many ways you can create such a number. However, if you actually want a REAL number for bodyfat, this very crude method can get you within about ±10%, and the Batons-Floats can get you within about ±1%.

The main presentation page on a simplified Hydrostatic Weighing system is at: Bodyfat - Accurate and Easy Determination

The page that provides the PVC construction details for the Batons and Floats and all the printable Analysis Charts is at:
Bodyfat Analysis Weights - Filled PVC Plastic Batons public2/bodyfwp2.html

The page that provides the construction details for the Pepsi bottle-based Batons and Floats and all the printable Analysis Charts is at:
Bodyfat Analysis Weights - Pepsi Bottles and Pennies public2/bodyfwp3.html

Other Health-Related Web-Pages in this Domain