It seems that many scientists are mystified by the fact that the measured temperature increases near the North Pole have recently been several times faster than the temperature increases measured in other places on Earth. No one seems to know why. It is actually pretty simple. There are actually TWO different reasons, one which is really obvious and the other a little more obscure.

Prior to around 1990, essentially the entire North Polar region was covered in permanent ice and snow, both water and land. According to Liu and Jordan Solar Energy, 1963, the reflectance of snow is around 0.7. That means that of the minimal solar energy that would directly have come to the North Polar region, after getting through the effectively thicker atmosphere (due to the low angle of incidence of the light in passing through it), 70% of that remaining light was getting immediately reflected back out toward outer space by the snow and ice. Only 30% of that rather small amount of incoming energy was actually available to be absorbed, regarding providing heat to keep that region warm. The entire polar region therefore remained very cold. 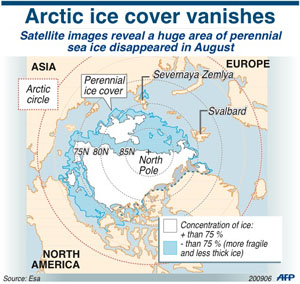 Now consider the situation since part of the North Polar Cap has melted. Some estimates are that 1/3 of it has already melted (by 2005). And that by September of 2013, the ENTIRE Arctic Ocean is expected to be ice-free. This leaves both open ocean and open land to now be exposed to the sun's light and heat. In other words, the high reflectivity of the snow and ice no longer reflects such a high percentage immediately back out into space. Liu and Jordan give a reflectance of 0.2 for open land. Open water is relatively comparable.

NOW we have a situation where only 20% is now being immediately reflected back out to deep space, instead of the 70% that it traditionally had been for many centuries. This means that the remaining 80% of the small amount of solar energy coming in is now available to heat the ground and air amd water, rather than the 30% that had been available when snow and ice covered everything. That is nearly three times the net intake of heat energy from the direct sunlight, in addition to the heat that the atmosphere transfers toward the poles from the equatorial regions by the Hadley Cell convections and the rest.

The second reason for the excessive heating of the polar regions has to do with the specific shape of the spectral absorption graph of carbon dioxide.

We have included some arrows at the top of this graph, which require some explanation! Any object that is heated releases RADIATION to get rid of some of that heat. The wavelength of the radiation is dependent on the temperature of the source. Scientists including Planck, Wein, Stefan, and Boltzmann developed equations that describe those effects.

Since the Sun's surface is around 5760°K, the wavelength of the MEDIAN radiation which comes IN is around 0.709 micron, a reddish color. This is represented by the LONGER downward (orange) arrow. There is also a different wavelength which is the one that is most intense, which is at 0.503 microns (a greenish color), which is represented by the attached shorter arrow to the left in the graph. Collectively, this results in the Sun appearing to be yellowish to us.

That INCOMING heat from the Sun easily gets through our atmosphere, and we can see that the left part of this graph shows that carbon dioxide essentially does not absorb any of that incoming sunlight.

It happens that carbon dioxide has extreme absorbtivity of such wavelengths of radiation from the polar regions, ENTIRELY DUE TO THE TEMPERATURE OF THE GROUND DOING THE RADIATING, as seen toward the right in the graph. Unfortunately, carbon dioxide has an absorption peak which is very close to the wavelengths that the Earth radiates, especially from the poles. That was great in the past, as in increased the Earth's original Equilibrium Temperature from around -5°F up to the current 59°F. No life was possible long ago, since all the water would have generally been ice! But now that we have decided to add spectacular amounts of carbon dioxide to the atmosphere by burning fossil fuels, the same characteristic now represents a dreadful problem.

The following was published by NASA in 2003 (and publicly presented in several web-sites), and then updated in 2005. This original animation only went to 2003. When additional data was obtained, it was extended to 2005. (The Everybody's Weather operation seems to have closed down!)

In 2008, those same researchers and others predicted that the ENTIRE Arctic sea ice cap will likely be melted and gone in September 2013!

So they are acknowledging that the effects are getting far faster, extremely quickly. Greenland will still have much of its Glacier covering, but other researchers are finding that even that is all melting at amazingly fast rates, where those researchers now feel that Greenland may be ice free within a few decades.

Ice which is IN the ocean does not cause sea level rise when it melts (the water replaces the ice), so much of this Arctic Polar Cap melting is NOT contributing to sea levels rising, yet. But all the glaciers on Canada and Siberia and Greenland and other countries are also melting, and they ARE above sea level! Around 2004. researchers had calculated that if only the ice on top of Greenland all melts, that volume of new water in the oceans will cause a world-wide rise in sea levels of around 22 feet. MOST large cities around the world were built at close to sealevel so they could profit from shipping trade. But if you consider a representative example, New York City, if and when the Atlantic Ocean rises by 22 feet due to Greenland's ice all melting, then the Hudson River and East River will also rise by the same amount. The majority of streets in Manhattan are LESS than 22 feet about sea level now, and so they will all be permanently flooded! Nearly every one of the thousands of buildings on Manhattan will only be approachable by boat, and basically the First Floor will have disappeared under the Ocean surface! Imagine what Property values will do!

Published update from NASA in 2011 Two specific events have been noted by NASA. One was that the largest iceberg ever has recently come loose from Greenland, an iceberg which has an area of 97 square miles! That ice will melt as the iceberg drifts through the North Atlantic Ocean.

NASA also announced that Greenland ice melted MUCH FASTER in 2010 than they have EVER detected before! Researchers and scientists now have no idea what to expect, because the rapidity of the ice melting is far faster than any Model would ever have predicted! They seem very apprehensive, or what I would call, scared.

Antarctica Regarding Antarctica, the fact that the ice there is so very thick, there has not yet been much change in the Earth's albedo due to white ice being replaced by darker water or soil which would capture much more solar energy and magnify these kinds of effects. But we can certainly expect that it is coming. Antarctica has enough ice on top of it to cause the world's seas to rise by around 260 feet (or 78.9 meters) should all that ice melt. The weight of that ice is known to have caused the Earth's Crust there to have subsided (sunk) by around 560 meters, so when the ice melts and that weight is no longer there, the Crust will rebound, likely causing another 560 meters thick of ice to be added to the oceans. (That ice IS currently below sea level, but when the Crust rises, the volume of that ice will be taken up by Crust, meaning the added ice will probably increase the sea level rise problems. Instead of 260 feet, the calculations indicate that the sea level rise due to Antarctica all melting is therefore around 330 feet.

The remoteness of Antarctica seems to have delayed serious attention regarding the melting there, but several extremely large sections of ice have broken off in recent years, one of which was comparable in size to the State of Connecticut. That ice took a few months to melt after it drifted out into the ocean, but it certainly melted. There are other sections near the edges of Antarctica which are also showing signs of rapid melting and fracturing, where additional huge icebergs seem certain to break free each year.

Personally, in examining all the data and the increasing rates that all this is happening, my guess is that nearly all the ice on Antarctica may be melted by 2100 AD. In other words, soon enough that small children today may still be alive to see the total effect. If the oceans DO rise by the cumulative total of around 410 to 450 feet, then Nashville, Tennessee (current altitude, 440 feet above sea level) may have Atlantic Ocean beaches! Florida and several other States may not even exist at all in just 100 years! Look at a map of the US to see how terrifying that thought is of a Nashville ocean beach!

This presentation was first placed on the Internet in June 2007.