Japan is located on what is called the Ring of Fire. This is a giant circle around the Pacific Ocean where edges of Tectonic Plates are slowly moving. This results in many earthquakes, and Japan certainly gets its share. Certain types of earthquakes, especially those under the ocean, can cause the floor of the ocean to suddenly rise up a few inches or feet. That can cause a sudden giant wave in the ocean, called a tsunami (soo-nah-me).

Japan experienced an enormous earthquake on March 11, 2011, but that one occurred quite a few miles out in the ocean. There is another huge earthquake which is known to be overdue already, which will occur in an area of the ocean called the Nankai Trough. When that earthquake occurs, it will be relatively close to the fourth-largest city in Japan, Nagoya, where over two million people now live. It will also seriously affect the even larger nearby city of Osaka (Japan's second largest city) and even Tokyo is expected to have some serious effects. Nagoya may experience the greatest flood damage from the coming tsunami due to its very low altitude above the ocean. Both Osaka and Tokyo have even more complication due to their having subsided (sunken) by around two vertical meters during the Twentyeth Century. Scientists feel that the Nankai Trough earthquake probably should have already occurred arould thirty years ago!

During 2012, Japanese government experts determined that as many as 400,000 people may die in that unavoidable coming and already overdue earthquake and tsunami. Part of that problem is due to Nagoya being a city of very low altitude, only a few feet about sea level. Even a tsunami wave of only three meters height (about ten feet) would rapidly flood most of the city, within minutes. But the Japanese experts feel that the coming Nankai Trough earthquake will create a tsunami which the experts think may be ten meters or more tall (more than 30 feet).

On August 30, 2012, Fukuoka Now published a news item published the day before by NishiNippon:

A report was released yesterday detailing the effects should an M9 earthquake and tsunami occur in the Nankai Trough. 320,000 casualties are predicted nationwide with 59,000 of them in Kyushu, of which 42,000 are expected to be in Miyazaki Prefecture. By contrast, only 10 deaths are forecasted on Fukuoka Prefecture.

The experts say that many tens of thousands of people will die on that day, possibly 400,000 deaths.

The coming Nagoya earthquake from the Nankai Trough WILL happen! It is a natural process which cannot be avoided or eliminated. It is known to already be severely overdue. I just want to artificially make it happen when we have removed all the people and animals from the region!

Nagoya is located at the inner end of a tapering bay. As a large tsunami wave enters the southeastern ocean opening of that bay, the water will have no choice but to get taller and taller until it gets to the inner end where Nagoya is at. The Bay of Fundy in eastern Canada demonstrates the same effect. Twice every day, two-foot-tall waves enter the ocean end of the Bay of FUndy, as a result of the Tidal effects of the Moon. But I have personally watched at the inner end of that Bay, as the incoming wave becomes around 50-feet tall! One minute, no water is visible anywhere, and it looks to be safe to go exploring. Within a few minutes, the entire visible region is covered by many feet deep of ocean water! And THAT is only due to a wave that started out at only two feet tall! In the case of Nagoya and the Nankai Trough coming earthquake and tsunami, the experts expect that incoming wave to be many feet tall. Once the magnifying effect of the tapering bay applies, it seems hard to believe that even reinforced factory builldings will not be severely damaged.

I do not want ANY of those people to die that day! The Japanese experts seem to have already conceded that tens of thousands of people WILL die that day, and they seem to be investing their efforts toward trying to arrange supplies of water and food and electricity and communication, for the 59,000,000 Japanese people who they expect will survive that day! I find that unacceptable! I INSIST that a serious effort be made to try to save the lives of those people who those experts seem to have written off.

NHK television has aired a program named 'Facing Urban Disaster' which expresses the attitudes of a variety of Japanese scientists (aired on March 8, 2013 in the US).

It was sad to watch as Japanese experts were so totally focused on planning water supplies and food supplies and electric supplies and communications capabilities. Virtually no mention was made of any of the enormous number of lives they seem to simply concede will be lost.

NHK also aired a wonderfully informative program, late in 2012, about the efforts of many businesses in Nagoya regarding trying to deal with the unavoidable coming earthquake and tsunami. Many companies have rebuild their entire factories, in hopes that the ROOF will remain solid and stable such that thousands of employees might go up on the roof to try to survive the severe flooding down below. It did not seem clear from the NHK program just how strong the reinforced buildings had been made, whether they would survive the intense shaking of the earthquake, before the Tsunami and flooding.

I believe there is a better idea, which should at least be tested! Maybe the United States would agree to evacuate some of the western Aleutian islands of Alaska, since only a few hundred people would need to be evacuated. Multiple experiments might even be tried there, to discover the most effective ways to artificially trigger earthquakes to happen. It is the ONLY way by which the accumulating tectonic stresses in the Earth's Crust can be released, except for having actual (unpredicted) natural earthquakes occur. 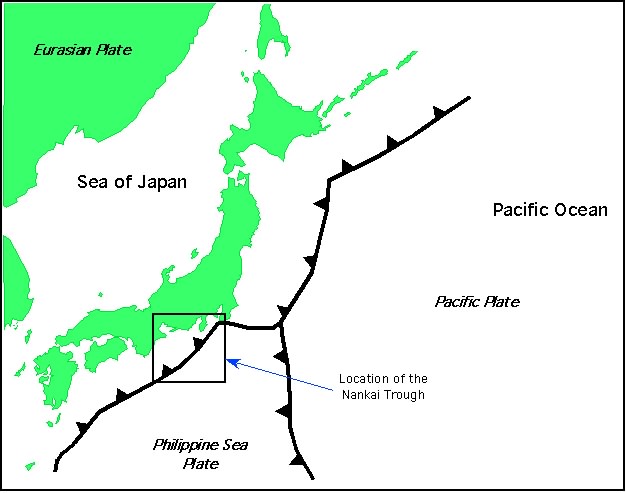 The government would arrange for FREE entertainment to be available for all residents. That might include free Concerts, free Baseball games, free Amusement Parks, and even free picnics and other events where food and drinks would be provided for free (on that one day!) Arrangements would also be made to move all zoo animals to a different zoo for that day, and all pets and domesticated animals would also be moved, along with animals in Animal Shelters. The Utility Companies would also shut off the supplies of all water, gas, electricity, etc, early on that day, to be able to empty the supply pipes, in case any of the pipes suffered any damage.

Domestic housing could be braced if the residents bought $100 of standard 2x4 lumber from local suppliers, such that angled braces could be placed inside of rooms, to stiffen the structure of the building. Commercial buildings might similarly be strengthened. Some owners might choose to not do such things, and when they come home the next day, they may find some structural damage. Families would box up cups, glasses and plates, so they could survive shaking with no damage.

The one day of extreme inconvenience could then result in 40 or 50 years of excellent safety from any further earthquakes, since all the Tectonic Stresses had been released, and they would take many years to again build up enough to cause another earthquake. The process might be repeated once every 50 years to eliminate earthquakes completely and forever!

This presentation is a Japan-specific application of the Calquake presentation regarding doing essentially the same thing in southern California. Eliminating California Earthquake Danger. The Calquake concept was developed in September 2001 and first put on the Internet in March 2011.

There ARE some complications which must be thought through. First, it is well known that when a natural earthquake occurs, the shaking often causes a number of aftershocks in following days. The March 11, 2011 earthquake was followed by around 500 aftershocks over the following week. If thoroughly Engineered, could the sequencing of such aftershocks be scheduled, such that aftershocks might occur at two minute intervals during the day when all the people had been evacuated from the area?

Another complication is that some earthquakes, such as the very overdue Nankai Trough earthquake, is certainly 'ready to occur naturally at any moment. If a bunch of boring equipment would start drilling holes into the fault line, might that trigger an actual earthquake even before any explosives were detonated?

Finally, the Nankai Trough is rather deep. Boring equipment has long been capable of boring down several miles into dry land or boring down several miles under the ocean floor. So it is not a problem of being able to make a lot of deep boreholes. But the desire is to only evacuate all the people for one day, and well-boring equipment might require longer time to make so many deep boreholes.

It might seem reasonable to start boring such holes while all the people were still remaining, but if there is even a small chance that the vibration of the well-boring equipment accidentally triggering an overdue earthquake, seems like something that must be avoided. THESE reasons are why I think it appropriate to arrange with the US government to evacuate the few hundred people from the western Aleutian islands, and make a lot of boreholes in faultlines there, just to learn whether accidental triggering of natural earthquakes were a real concern. Also, it seems valuable to know if it is better to detonate a hundred dynamite charges simultaneously, or at 10-second intervals or at 5-minute intervals. There may be one of those which might minimize overall shaking, such that damage to buildings or roads or bridges might be minimized in more populated regions.

This presentation was first placed on the Internet in January 2013.