Recognizing that the Moon and the Barycenter Exist

Every day, at Moonrise and at Moonset, the net Vector gravitational Force acting on any experiment at any location on the surface of the Earth is altered by the "sideways" gravitational attraction of the Moon. A few hours later. as the Moon gets near the zenith in that local sky, the gravitational attraction of the Earth and Moon compete so the net G is then less. A few hours later when the Moon (hidden) is at the nadir in the local sky, the Earth and Moon combine to produce a larger collective gravitational force AT THAT LOCATION. These changes happen constantly and an hour difference can affect the net effect (of the Barycenter). These effects also are affected by the Latitude of an experimental apparatus, so for a precise experimental result, it is critical to know the exact location of the Moon in the sky, the Latitude and Longitude of the experimental apparatus, and the exact time at which the experiment was done.

All gravitational attraction in the Earth-Moon system actually arises from the Barycenter, which causes some Vector Force complications, since both ends of such Force Vectors are constantly moving at rather high velocities and in complex directions. If we consider a three-dimensional reference system of the center of the Earth, then the location of the Barycenter constantly changes by 793 ± 27 mph (or 1276 ± 44 kph), while the location of any experiment on the surface of the Earth constantly moves at even higher velocities as the Earth rotates.

A useful graph would therefore require the exact location and time of each experiment which is performed to be known, and also a calculation of the exact location of the Barycenter be known at that instant. Rather than the previously assumed Newtonian calculation being done for the exact center of the Earth, some Vector gravitational Force calculations needed to be done for the Space Angle from the (instantaneous) Barycenter at that moment for that exact instantaneous experiment location. Only then could the correct data points be presented in such a graph. Such analysis and correction for each data point would be possible even now to make this graph to become useful. 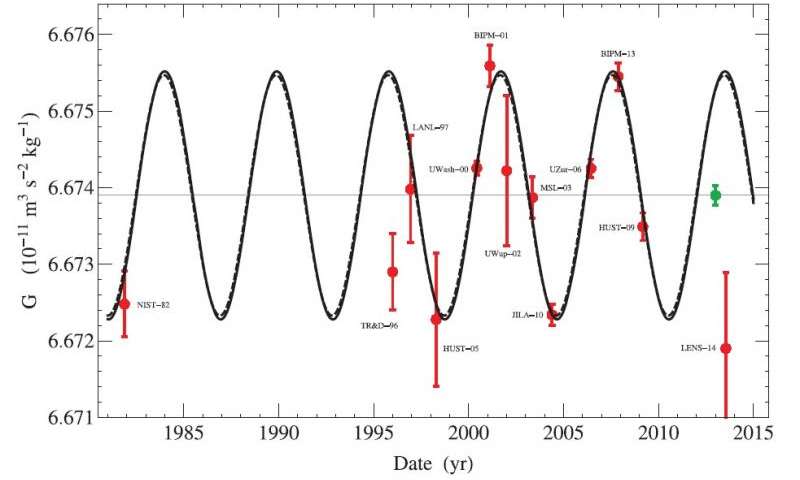 Anderson et al make several astounding claims in the data in this graph. The 13 data points are claimed to lie on an impressive sine-wave curve which (amazingly) exactly resembles a totally different sine-wave curve, which has to do with very tiny variations in the LOD (length of day). The shown individual (red) error factors for each value seem to deny any validity for such a really precise sine-wave curve. I also tried to duplicate the r-squared data analysis which is critical to validity of any such graph, where the common expectation is a r2 of at least 0.99. When I tried to use their data points to generate an r2 error value, I was unable to even get an r2 of 0.60.

(Phys.org) Newton's Gravitational constant, G, has been measured about a dozen times over the last 40 years, but the results have varied by much more than would be expected due to random and systematic errors. Now scientists have found that the measured G values oscillate over time like a sine wave with a period of 5.9 years. It's not G itself that is varying by this much, they propose, but more likely something else is affecting the measurements.

It certainly seems likely that this graph does not contain any information of value. The Anderson group seemed to totally neglect the importance of WHERE an experiment was performed, and exactly when, since the location of the gravitational Barycenter, the actual Locus of gravitational attraction in the Earth-Moon system, constantly moves around deep inside the Earth at around 793 mph (or 1276 kph) daily motion plus another 27 mph (or 44 km/hr) monthly motion at a distance about 2,902 miles (4677 km) from the exact center of the Earth. The DIRECTION and INTENSITY of any detected Gravitational Force in any experiment near the Earth's surface, which is actually due to the entire Earth-Moon gravitational mass attraction from the Barycenter, therefore constantly changes. Such information is critically important when trying to determine a Vector Force quantity in a very delicate experiment. This is especially true when both ends of such Force Vectors are moving at high velocities and moving in all three dimensions.

There are a variety of important aspects of this subject which few people seem to have ever explored. For starters, most "scientific constants" happen to be SCALAR values, but a few are VECTOR values. The peculiar behavior of G in these recent decades seems to bring up the possibility that G might be a Vector quantity, where math (Vector) formulas might be affected by other parameters.

I see that after Anderson et al published their paper in 2015, a variety of comments regarding it occasionally even seemed to be aware of my February 2004 publication of this subject, where I had first started trying to get NASA or the ESA to do a G experiment as part of the many rockets we have launched toward the outer Solar System. I have proposed that a tiny satellite be added to a spacecraft, to orbit around the spacecraft, where we will precisely know the masses and orbital radii, to be able to calculate G to a thousand times better precision. I notice that no one seemed willing to mention my earlier work of eleven years or my name before their efforts.

A rather simple and inexpensive Earthbound set of experiments also seems beneficial in determining a far more precise value for G. I think that the following is a scientifically valid way to pursue this subject. At fairly modest expense, I propose to bore one hundred relatively conventional vertical boreholes, at or near the Equator and spaced about 100 km (60 miles) apart. The boring equipment would be monitored carefully such that the 1.1 km (1800 foot) deep boreholes are EXACTLY vertical.

Even with imprecise measurements occurring, and unknown temperatures and air pressures existing in different locations inside the borehole, each borehole would have a virtual balance of the two weights, much like the way a deep water well and rope and bucket is arranged.

However, the upper metal rod would have an EARTH RADIUS of 1 km greater than that of the lower rod. Using Newton's equation of Gravitation, the precise attraction between the Earth and each of the two rods can be calculated.

We know that the Radius of the Earth (at the surface sea level at the Equator) is 6,378,137 meters. Each of the two metal rods hanging in the borehole are machined to have exactly 1,000 kg mass.

As a result, and continuously, there would be a slight imbalance, which would be constantly monitored by a (red) electronic Tension Gauge attached between the cable and the wall of the borehole.

In the event that the value of G might slightly change over time, the continuously monitored tension reading would therefore immediately change.

It would not just be a reading thirteen times over forty years, but instead it would be a continuous and precise value of G. It would even be monitored at a hundred different locations along the Equator.

These tension gauge readings would be so extremely accurate that exact CAUSES for any changes might be monitored and known.

For example, if the value of G somehow increased by one part in a million, the Tension Gauge would increase by about 1/3 of a milligram, an obvious change in the monitored tension.

It seems that such experiments might also be able to monitor the location of the Barycenter, which we have never been able to measure up to now.

If my "hundred boreholes around the Equator" would be installed, then even more valuable data might be collected. It might happen that all hundred tension gauges might change in unison, but it might also be possible that whatever effects of a changing G might progress around the Earth, which might provide some experimental evidence for how rapidly the process of Gravitation occurs. This methodology seems accurate enough to even detect if the Gravitation process might occur at several times faster than the speed of light, although that would await actual experimental evidence to confirm or deny.

A Variation of this Apparatus

A method of measuring the Gravitational Constant which is similar to traditional methods, but which can be far more precise is availablle.

The determination of the Earth Radius at the sea level surface of the borehole is reasonably accurately known (probably to the nearest foot, that is to one part in about twenty million). The exact mass of each of the two metal rods can be measured to the nearest milligram, that is, one part in a billion. A Laser Ranging device is installed between the two metal rods, so that the exact difference in Earth Radius between the two rods can be determined, within a millimeter, that is to one part in a billion.

With these very accurate values, Newton's Gravitation formula could be used to determine Mu to extreme precision. An extremely accurate value of G might then be obtained, even from one borehole.

My personal suspicion is that the "unnoticed" relative movement of the body of the Earth to the location of the Barycenter of the Earth-Moon system might turn out to be a prominent effect in the recently discovered allegedly sinusoidal variation of the value of the Gravitational Constant regarding the Earth.

My earlier published work of February 2004 is regarding a different scientific approach to accurately measuring G, by adding a precise tiny "satellite" to "orbit" spacecraft which we launch toward the outer portions of our Solar System, to eliminate all spurious gravitational effects on such an experiment, at Accurate Mass of the Earth. A new Important Gravitational Constant Experiment. (Feb 2004)
This presentation was first placed on the Internet in February 2017.