Destruction of I-10 Twin Span Bridge

The day after Hurricane Katrina hit, I tried to inform leaders in New Orleans and Louisiana about the correct explanation of the roughly 1500 missing people that no one could account for. To this day, ten years later in 2015, no one else yet seems to understand!

I could not believe that I could not get any authorities to understand where those 1500 people disappeared to. I consider it to be amazing incompetence that no one would listen, although I did realize that they were all really occupied with complex events. The general assumption of the time was that an extra 1500 people had evacuated in cars during that terrible night. 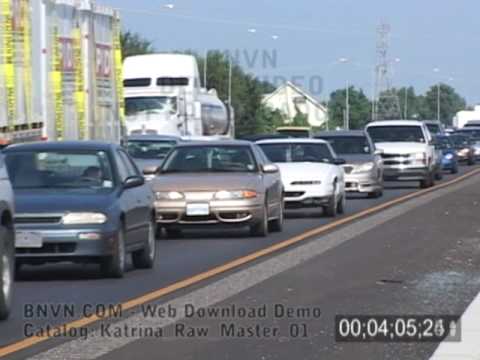 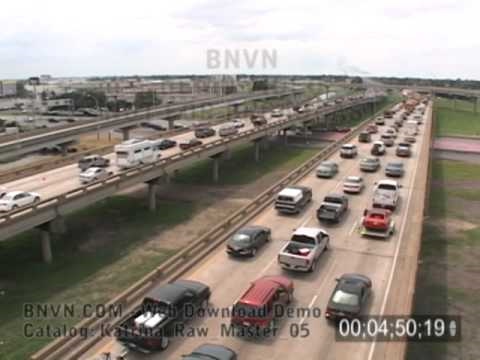 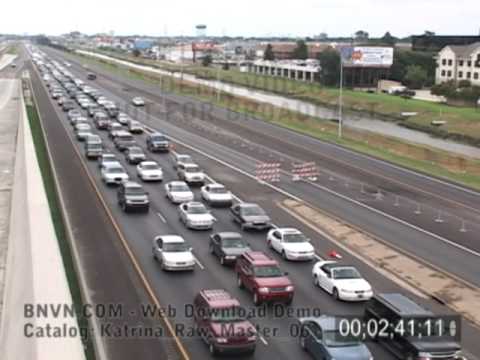 Specifically, the eastbound lanes of Interstate 10 were completely filled with traffic virtually standing still, trying to exit the New Orleans area. All eastbound lanes of Interstate 10 were bumper to bumper traffic, virtually standing still. You might notice that the westbound lanes in the third archive photo here, INTO New Orleans, were virtually vacant during the evacuation. Keep in mind that virtually 100,000 vehicles needed to exit the New Orleans area, and all those vehicles only had three major highways to carry the traffic out, westward along I-10W, northward over the Lake Pontchartrain Causeway, and eastward along I-10E, which involved crossing over the eastern end of Lake Pontchartrain over the Twin Span Bridge. The eastbound (rush hour) traffic over I-10E only carried a maximum of around 4,000 vehicles per hour. In about 6 hours of carrying traffic that evening (August 28, 2005), that suggests that maybe only around 24,000 vehicles passed eastward over I-10E in the hours prior to the Hurricane making landfall. The point is that MANY vehicles certainly STILL needed to pass eastward over the Bridges and that Causeway at the time that Katrina arrived. In other words, all the lanes were certainly STILL filled with traffic then.

Hurricane Katrina made landfall during that night. The National news broadcasts of the next morning (August 29, 2005) showed massive destruction of some sections of the Interstate-10 Causeway, associated with the Twin Span Bridge. Here is one of many archive photos of Interstate-10 on that next morning. NO traffic then remained on the bridge and we can see that the next span to the left had broken loose and fallen into the water below. Imagine driving along that bridge span in pitch blackness of a power blackout and with zero visibility due to the rains and winds and debris of Hurricane Katrina. It is easy to imagine many drivers who were still on the highway, driving off the end of this pavement end and having the vehicle fall many feet down into the water below, with probably more vehicles following them off the bridge span and crashing down on top of their sunken vehicle.

The taller middle sections of the bridges survived fine. There were two main bridges having a total of four causeway approaches, each consisting of 436 simply supported precast concrete spans, each of which was 65 feet by 40 feet. Each span weighed 285 tons. Very little actually held the concrete sections down to the steel superstructure. In fact, later government research suggests that the Storm Surge and giant waves actually may lave LIFTED many of those 285 ton blocks of concrete up off the supporting structure, due to hollow spaces on the underside of the preformed concrete blocks.

38 spans of the 436 eastbound lanes of the lower bridge approach had entirely collapsed down into the water due to the Storm Surge and waves and wind and rain forces of the storm. Another 20 sections of the 436 westbound lanes had also collapsed, but it is believed that there was virtually no traffic INTO New Orleans during the Hurricane that night.

Looking at these traffic photos, we can see that Police had realized the need for more evacuation traffic, where all lanes in some of the photos seem to be moving the same direction. This might suggest that even some of those 20 westbound spans that collapsed might also have accounted for more drownings and deaths.

Each of those destroyed sections were 65 feet by 40 feet. In the nearly stationary traffic of the evening before, seen in the photos above, we see that the 15 foot long vehicles were separated by around five feet. This indicates that roughly three vehicles were momentarily on each span section lane, and so three lanes of traffic indicates that approximately 9 vehicles had been on each of those sections. This suggests that the 38 of the eastbound spans which collapsed down into the water, seems to account for about 38 times 9 or about 340 vehicles of that nearly stationary traffic which MUST have fallen into the ocean during the night before. It figures that each vehicle had an entire family inside it for the evacuation, which seems to account for about 1350 people who likely immediately drowned in the ocean during that night.

With horrible visibility due to the hurricane rain and wind and the total electrical power outage, driving must have been very difficult. So, even drivers who happened to have been on sections of I-10 which had not collapsed, may easily have driven off the end of a remaining section, and also down into the ocean to drown. The archive bridge photo above suggests how that might have occurred in pitch blackness.

On the morning of August 29, 2005, I saw the videos of 814 now absolutely empty causeway spans of eastbound Interstate 10. I immediately WONDERED WHERE ALL THOSE CARS WENT! I therefore quickly estimated that 500 vehicles might have fallen off (or were blown off of) of the eastbound lanes of Interstate-10 during that night, most due to actual collapse of the many (38) sections of the highway which had fallen into the ocean, but also many due to people driving in extreme limited visibility off the ends of remaining sections, and therefore also down into the ocean to drown.

So, on the morning of August 29, I contacted the State Police of Louisiana, the (few remaining) Police of New Orleans, the National Guard, the US Army, the US Coast Guard, the Governor of Louisiana, the Mayor of New Orleans, the National News Networks (including my good friend Peter Jennings who was then Anchor of the ABC Nightly News), and even the US government in Washington, DC. My desire was to get ANYONE to search the ocean waters near where the Interstate-10 bridge collapses had occurred the night before. I did not feel that anyone would have survived inside cars deep under ocean water, but I wanted FAMILY MEMBERS to be able to find the bodies for proper Services.

The ferocious winds of the Hurricane would certainly have stirred up the waters such that vehicles might have moved a quarter mile or half mile from where the vehicle had gone off the bridge. But I wanted people with METAL DETECTORS to sail around in (wooden) boats to try to locate the large steel structures of the many vehicles which I was sure were sunken under the waters in the region.

Amazingly, as far as I know, NO ONE HAS EVER FOUND around 1500 of the bodies lost due to Hurricane Katrina, the 1500 bodies which I was certain I knew where they were! As of 2015, it is now believed that 1833 people died due to Katrina in the New Orleans area. A few hundred bodies were later found in houses or buildings or vehicles in the Lower Ninth Ward and in the Superdome and elsewhere in New Orleans. I believe that only around 300 bodies have been accounted for so far (ten years later)!

My guess is that those 400 vehicles that I believe fell off the collapsing bridge sections of eastbound Interstate-10, ARE PROBABLY STILL DOWN IN THE WATER but they may now be a mile or two away due to ocean and river currents during the past ten years, and they are certainly now buried by several feet of sediment by now. So divers probably could now not see any vehicles down there. But if metal detectors found ANY of those 400 vehicles buried in the sediment, those vehicles certainly still have VIN numbers which identify the vehicles. So the OWNER of any found vehicles should then be easy, even now, ten years later. There may no longer be any organic remains of the occupants of the vehicles, except possibly for some bones. But Memorial Services may still be possible for nearly ALL of the casualties of Hurricane Katrina.

When I could not get ANYONE to pursue this course, it occurred to me that MAYBE 'entire families' might have drowned in those evacuating vehicles, so there might not have been any remaining relatives who might have ever tried to search for any survivors. THAT might have explained why NO ONE seemed to ever even seem to have any interest in finding the thousands of people who had tried to evacuate New Orleans on that August 28, 2005.

I am still amazed that I could not get ANYONE to try to find 1500 human bodies, inside 400 sunken vehicles in the water, even though I made serious effort to try to get MANY people to try looking for them!

What I would like to encourage NOW is for one or more fishermen to borrow or rent Metal Detectors and to wander around the waters within a few miles of the Twin Span Bridges of Interstate 10 just east of New Orleans. I am absolutely certain that they WILL find many metal vehicle wrecks down in the water. Someone might then dive down to check out what the VIN number is on that vehicle, to quickly learn the OWNER of that vehicle. Any surviving relatives might then arrange for a respectful Service for that family members.

This presentation was first placed on the Internet in June 2015.