An Immediate and Permanent Solution to the Church Pedophilia Issue 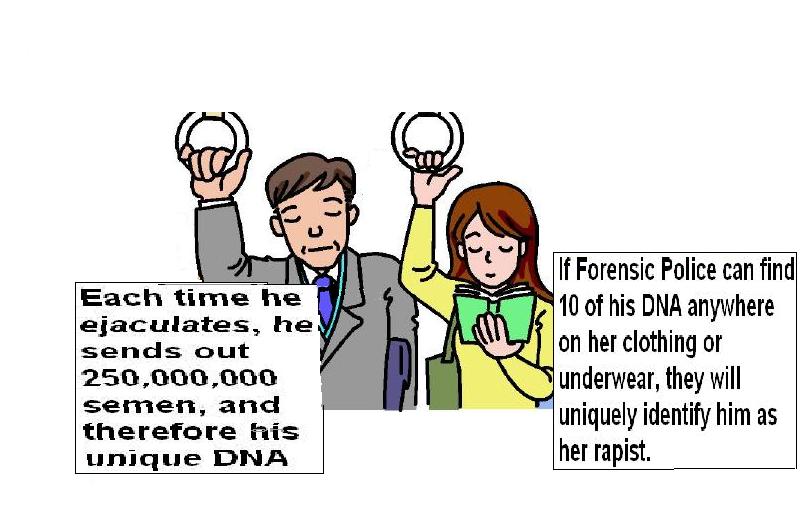 I have been trying to provide an educational solution to the matter which is currently destroying the Catholic Church. Rather than trying to use any bureaucratic approach, which never seems to work, this is a very unique idea.

There is a scientific fact which should terrify every sex crime pervert. When a man ejaculates semen, he sends out around 250,000,000 sperm each of which contains a complete unique set of his DNA. Only ten sperm is actually necessary for Police to obtain his unique personal DNA to identify him as the pervert who had raped or molested. Can you beat those odds?

I want to have Nuns and Catholic Schools teach a rather simple behavior to all of the female (and male) children.

Every girl and woman who has endured this crime can now know that she has the immense power of DNA evidence, where the abuser cannot avoid being arrested and imprisoned due to his own DNA in his semen. The tables have turned and the man will no longer get away with such crimes.

It is entirely based on a scientific finding, that every person has trillions of cells, including the cells in men's semen, which all contain a unique and complete pattern of his DNA. Police Laboratories already use this fact to identify criminals in crimes. I just want to teach any girl or woman (or boy) to "preserve her or his underwear" (and possibly also bedsheets) in order to preserve the unique DNA of the man who had committed the sex crime. I teach the girls and women to buy an airtight Tupperware container to protect her evidence from ever being contaminated by any other source. A child, or her family, or her Church, might offer a secure place to preserve this evidence. Even a Bank Safety Deposit Box could be used.

A Church might hire a (part time) Social Worker, (probably best, a Nun) to describe to families why they might now (again) have total confidence in the Church as a safe place for their children. I want to present a location where children and possibly parents of potential Church Members might visit, to learn why this program should greatly improve the safety of the young women in and around the Church.

Each young woman would always have total control over whether she wanted to proceed with pursuing a rape or molestation case. She might choose to store a sealed Tupperware bowl which contains her underwear and bedsheets of that experience, where she might decide to wait until some later date to proceed.

Our single purpose would be to educate any girls or women who visited our office that if she had an unfortunate experience, she should preserve her underwear and bedsheets and securely store them in a brand new Tupperware container. Our presentation to any visitors would be to explain that every man's semen contains countless sub-microscopic specks of the unique DNA of his body. By preserving the possible DNA of such an event, and securing the evidence from any possible contamination in a sealed Tupperware container, she would forever have a personal choice to pursue the perpetrator of the rape or molestation. At any later time of her choosing, she (or a Judge) could have a Police Laboratory or a Hospital Laboratory do the DNA analysis. That is exactly what all modern Police Labs now do every day in identifying criminals from tiny specks of DNA in evidence.

Each woman would always have the personal choice to proceed or wait. Much of the benefit of this system is after one girl or woman proceeds and a Judge Convicts and Sentences even just one man for doing such a crime. Local news media (and possibly the Church) might publicize such a conviction and prison time. This is essentially an "education program". The girls and women would realize that they are now far safer. More importantly, the men, including Priests, who might consider doing such a crime would see news media reports that might show a warehouse of stored Tupperware containers which contained DNA evidence of such crimes. I want those possible perverts to think about whether there were already a bunch of Tupperware containers which contained his DNA, each of which could send him to prison for many years.

Interestingly, the Church would have no responsibility in trying to control any aberrant Priests. Each Priest would know that his own DNA evidence would unavoidably convict him of every such crime, totally independently of anything the Church might try to do. He would choose not to molest any child, simply by knowing how accurate Police DNA analysis has been proven to be. Whether he wanted to molest a child or not, he would know to resist such ideas, because he would know that if and when he molested even one child, his own unique DNA would certainly cause him to then spend many years in prison for the crime.

The result of this Education program will be to immediately end the thousands of children who have been molested by Catholic Priests. Even a single child being molested may become unheard of, ever again.

This is a "prevention" system that might even eliminate any incidents of rape and molestation. If the men (including Priests) who are considering doing such a crime realize that they will be identified, arrested, convicted and put in prison, they may each decide to resist doing their proposed crime. The goal is to encourage such perverts to not even try.

Our proposed office might soon have zero visitor traffic. The men in the Church community will realize that there is no point in raping or molesting any girl or woman due to the absolute certainty of being arrested and imprisoned. The very issue of rape as a problem may completely disappear.

Please notice that the bureaucracy of the Catholic Church is not involved at all in trying to monitor aberrant Priests. In a sense, this concept is a "voluntary and individual" action by each Priest to choose to treat children the way the Catholic Church knows they should be treated. The Catholic Church would get National and International attention on news media as being "the safest place to send a family's daughter to attend Church."

Please also note that there are many other Religious Organizations which will certainly send teams to travel to Catholic Churches to learn about instituting their own "copy" of the system that we will be benefiting from. It may even provide wonderful jobs for recent Catholic University Graduates in Social Work and in Business Management to possibly staff systems that those many other Religious Organizations might want to set up.


nomore.html is where we provide more complete information about this system.